This blog is dedicated to all of the students, teachers and parents of Parkland High School, and to every single person who has ever been a victim or witness to the tragedy of a school shooting.

When I was in high school, the term “school shooting” was a metaphor used to skip class.  “Hey, let’s “shoot” upon the dike and watch the lake for a little bit and see if we can spot any gators,” or “let’s “shoot” over to the dime store and buy a bag of gum and candy.”

That metaphor, I’m afraid, is a thing of the past.  Nowadays, it means exactly what it says.

From the very first school shooting I ever heard about (Columbine) up until the most recent one, it has broken my heart to imagine what those involved had to go through and the carnage that they had to witness.  Seeing bodies of their dead friends lying on the cold tile floors, hearing the ratta-tat-tat of constant gunfire all around them as they scrambled frantically to find a safe place to hide hoping that a stray bullet didn’t find a way to them and end their lives.  My heart went out to the parents who, without knowing, said their last goodbyes to their child as they left for school that morning.  But I can tell you that I have never been so appalled by the public’s reaction to a school shooting as I am to the general reaction of the Parkland school shooting.  Not only are a majority of people being absolutely ridiculous with their conspiracy theories, they are also being mean, cruel and ignorant.

While I certainly can’t speak for everyone, I can tell you that at 17 years old, I was extremely articulate, well-spoken, educated, a member of the National Honor Society, worked a job and made my own car payment.  I knew about laws and the government and how they worked, but I was never political nor did politics interest me.  I am so sick and tired of people referring to these young adults as kids – they’re NOT kids, they’re on the cusp of graduating and some, I’m sure, will be headed to college.  What is it about these young adults that people find so alarming or frightening?  Because they’re smart?  Because they’re outspoken?  Because they continue to stand up for what they believe in, even in the face of adversity?

Many conspiracies have been posted on Facebook and other social media outlets about these outspoken youths.  I have read that this school shooting was a “false flag” (the same thing I heard about Sandy Hook Elementary), that the Democrats are behind them and encouraging or egging them on in an effort to push their own agendas for gun control, that David Hogg is a crisis actor who has been seen at the scene of more than one school shooting, and a Maine Republican House candidate named Leslie Gibson referred to Emma Gonzalez as “a skinhead lesbian,” (https://www.nbcnews.com/feature/nbc-out/gop-candidate-who-called-teen-skinhead-lesbian-quits-race-n857861), while others go even further out on a limb and compare her and the others to Hitler (https://www.history.com/news/how-the-hitler-youth-turned-a-generation-of-kids-into-nazis).  Seriously?  How dare anyone even HINT at a comparison between the two???  No matter how hard these youths are knocked around by name-calling or how many horrible things the public continues to say about them, one thing is certain – they’re resilient and they’re not going away.  They remind me of the blowup clown punching bag my kids had when they were little.  They would punch him in his big red nose, knocking him backwards, but he’d bounce right back up, ready for another round.  None of these things being said about them or done to them keeps them from continuing their cause, and for that reason alone, I applaud them.

While a vast majority of these people who speak out against these Parkland youths keep citing that they feel they’re attempting to disarm them and leave them weaponless, citing a Democratic following urging them on, I couldn’t disagree more.  One thing that I think everyone should keep in mind is the fact that these youths grew up in a generation where school shootings are a norm.  They’ve either read about them in the newspapers or seen coverage of them on television, probably wondering when it might happen to them.  They do not remember a day in their lives when something like this DIDN’T happen.  They’re not trying to have guns banned, nor are they attempting to disarm any American citizen.  They are BEGGING for help, for government officials who can assist in making changes to step in and step up and make gun laws stricter to prevent another school shooting from happening.  In other words, they don’t want there to be any more victims – they want Parkland High School to be the last school ever to experience such an atrocity.  What about that fact is so hard for people to understand?  These young adults have voices, too, just like everyone else, and they want theirs to be heard.  I’m listening…are you?  Just as every American citizen has the right to bear arms, every single child, adolescent and teenager has the right to go to school without worrying about whether that day will be the day that they’re blown away by some crazed lunatic whose only answers to their problems is taking the lives of  innocent people.

Want proof that there are people and websites who want only to tarnish these young adults?  I saw a photo making its way around social media yesterday that depicted Emma Gonzalez ripping apart a copy of the U.S. Constitution.  Immediately, I knew it was photoshopped, asking myself why anyone would do this for any reason other than to spread even more propaganda and hatred, as if there isn’t enough going around already.  But here’s the REAL picture, and the story that goes with it:

Is it just me, or is there a HUGE difference between tearing apart a shooting TARGET and ripping up the Constitution?

Additionally, the newest outcry against Ms. Gonzalez is that she is shown speaking at a podium, wearing a jacket with a Cuban flag on it.  I have seen comments such as “deport her” (ummmm, excuse me, but she IS an American citizen, born in Florida), “how dare she wear that on her coat while she lives in the U.S.?”  So, we do what now?  Tell her that she can’t display a flag depicting her heritage?  That she lives in the United States and the only flag that should be allowed is the American flag?  Have these same people NOT seen the flags inside the White House or outside of the United Nations?  We have NO RIGHT to tell anyone to ignore their heritage and forget about their roots, lest we strip them entirely of who they are as a person.

Were any of these students actually crisis actors as a majority of the conspiracy theorists claim?  I never thought they were.  Unfortunately, not everyone shared my views:

No ‘Crisis Actors’ in Parkland, Florida

Of course, there will always be some Negative Nellies out there who will still continue to refuse to believe the truth even if you were to slap them in the face with it.  I have found out through study, reading and research that there are some hardcore conspiracy theorists ready and willing to attempt to debunk any amount of truth they’re handed.  And even worse than that, someone who always has a negative and/or hateful comment in the deck, ready to shuffle and deal.  I do my best to distance myself from those kinds of people because I don’t want their negativity inside my atmosphere, nor will I let their hateful and demeaning remarks take away from my belief in these youths, for they are our future!

I made a post to my Facebook page in reference to the March For Our Lives movement with this following statement:  I’m going to make a comment about all of these nasty, hateful posts that I am seeing today regarding March For Our Lives….I have to ask myself this question. If this was YOUR child or YOUR grandchild who had to experience such a horrible tragedy, would YOU still feel the same way as you do about these young adults from Parkland????? Until you KNOW how a child or a parent feels after going through something like this, you really shouldn’t be mocking or ridiculing them. Be careful how you judge….it COULD be your child/grandchild’s school next time! My grandson participated in the march today, and I couldn’t be more proud of him for standing up for what he believes in. Way to go, Aaron Steele Turner!!!!!!

I honestly don’t know whether to feel angry, amazed, concerned, shocked, appalled or disgusted by the way that some people feel and think.  Perhaps I am a little bit of all of those emotions combined.  The question I proposed was an honest one and the issue involved is very real.  Some show such a lack of respect to the students, parents and others who are grieving from losses, giving absolutely no thought that the hatefulness spouted off on social media feeds is probably also seen by those same parents who lost a child in this tragedy.  Sadly, I honestly don’t think those people care.  So this I say to you…just because it hasn’t affected you personally yet doesn’t mean that it won’t at some point in time, and I most certainly hope that others would show you the respect that you failed to show them in a similar situation.

I’m proud of these young adults who are brave enough to address issues that a lot of citizens, government and political officials alike stay miles away from – I applaud their bravery and their ability to stand firm in the face of opposition.  My grandson, Aaron Steele Turner, stands with you!  Keep marching!!! 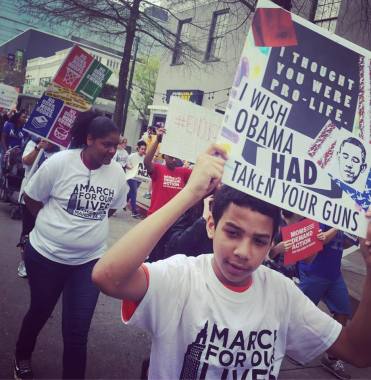 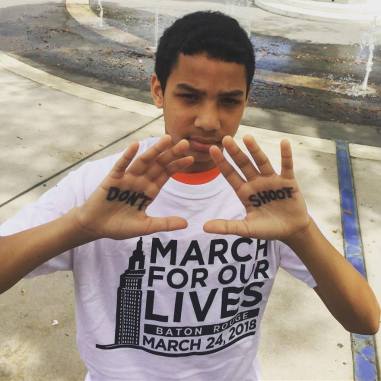 Here’s a suggestion…take a moment to remember those whose lives were lost in the Parkland High School massacre, and keep their families and friends in your thoughts and prayers as they continue to mourn and hope for a better tomorrow.

This is a text widget. The Text Widget allows you to add text or HTML to your sidebar. You can use a text widget to display text, links, images, HTML, or a combination of these. Edit them in the Widget section of the Customizer.

Join Me On Spotify!