One of the things I love most about living in Indiana is enjoying Fall festivities and admiring the fall foliage.  I had the opportunity to do them both at the same time when my husband and I attended the Fall Harvest Hayride in Clarksville.   I’ve loved hayrides ever since I was a kid, but going on one in Florida simply cannot be compared to going on one when there’s a crisp coolness in the air and the trees surrounding you are on fire with reds, oranges and yellows.  The laughter of children and conversations between adults filled the atmosphere around me, giving the ambience of the evening a special, magical spark.

So, grab your jacket or coat, whichever you prefer because you’re going to need it, and come along with me while I take you on a hayride through Lapping Park!!!  I hope you enjoy it as much as I did!!!

This was the hay-filled trailer we rode in on! 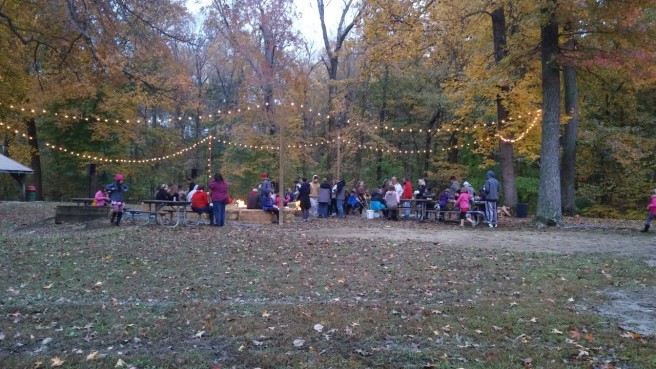 Time for some folk music while we roast marshmallows and make s’mores over an open campfire.  It was hilarious watching my husband try to make a s’more because neither one of us had ever made one before…so, the graham crackers were broken, the marshmallows burnt and the Hershey’s chocolate bar cold as ice, but it was still good.  Gooey and messy, but good.

Guitarist and vocalists, Mike and Molly, who provided the music and encouraged the audience to sing along!  One of the many fire pits that were burning inside the square.  Fear not….volunteers were standing by in the event that flames jumped the rails!!! 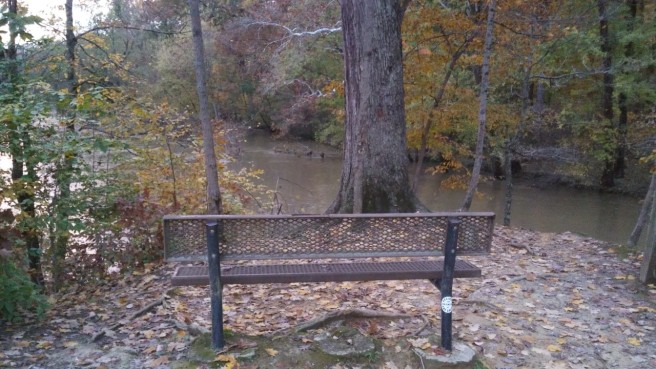 So peaceful and serene.  If you could sit on this bench for five minutes and talk to someone, who would you choose?

A path to….?  Look at all of those beautiful colors! 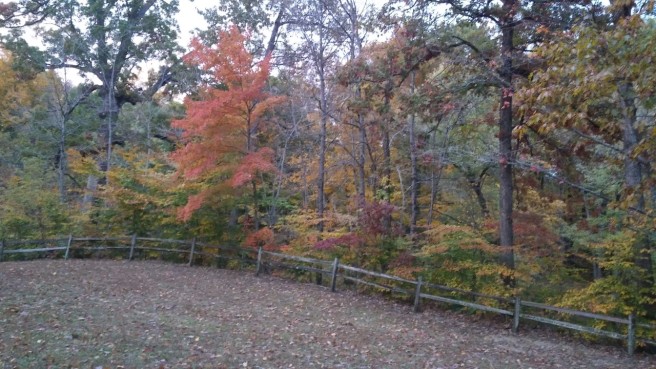 Some of the foliage along the path that leads down to Silver Creek (where the bench was).

Some fallen leaves…I didn’t want them to feel left out because they’re no longer on the trees..:)

The Monarch Waystation.  They have butterfly gardens at the park now.

Into the woods we go, following the lit path that led to the Amphitheater where the live animal show took place.  I saw a baby alligator, a baby skunk, a Eurasian Eagle Owl and a giant bullfrog…ribbit!

There were also cordoned off areas that had games and activities for small children, in addition to the playground that is directly in front of Endris Lodge.

We had so much fun and totally enjoyed ourselves and we also plan on attending again next year.

Did I tell you how happy I was to get back to the car where it was nice and warm so that I could thaw out my fingers and toes???

I am a wife, mother, grandmother, sister and aunt. I worked for nearly 30 years in the field of law enforcement, but am now retired. I'm originally a southern girl, born and raised in Pahokee, Florida, land of black muck, Lake Okeechobee and the heart of the Glades. I now reside in Clarksville, Indiana and love seeing the change of seasons, the cold weather and blankets of snow. I love writing....blogs, short stories, poetry, and I just finished my first novel, entitled Animus, and hope to have it published. View all posts by glendascorner

This is a text widget. The Text Widget allows you to add text or HTML to your sidebar. You can use a text widget to display text, links, images, HTML, or a combination of these. Edit them in the Widget section of the Customizer.

The Other Me – New Novel Now Available

How To Win A Copy of My Newest Novel

Have A Free Read…On Me!!

COVID-19: The Virus That Shut Down the World